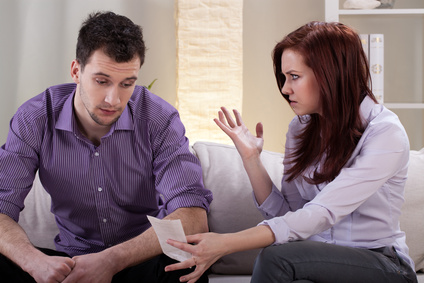 When looking for marital partners, men and women look first for common family goals, financial compatibility, and then compatibility in career choices, sexuality, and religion. Often opposites attract, and financial personalities range from savers motivated by security and spenders motivated by self-determination. Without blaming the other for their differences, couples can ask the other about their earliest recollections of how money is spent to understand why they may be different at this point in each partner’s life.

Financial advisors recommend setting financial goals to create an emergency fund, debt reduction, retirement planning, and a will sooner than later. Insurance is critical, including health, life, disability and property protection. Tools can be found at learnvest.com, mint.com,, and mvelopes.com among others.

One suggestion to recover from debt is to list your debts from the smallest amount owed to the largest.

Proceed accordingly paying the same amount toward your debt each month regardless of the number of debts owed.

CRYSTAL LAKE – Ahead of their October wedding, Matt and Crystle Mariani cut back on date nights and going out with their friends.

The Crystal Lake couple are both planners, and they’re both savers.

“It’s easy to … say, ‘OK, We want to get married; next we want to get a house,’ and now we’re continuing to do that and plan together for one day [when] we’ll want kids and we’ll want to go on vacation,” Crystle Mariani said, sitting on the couch in the home the two bought and moved into last month.

Arguments about finances early on in a marriage are the top predictor of whether a relationship will end in divorce, according to a 2012 study by a Kansas State University researcher.

“Money is an emotional issue with most of us,” said Jim Issel, a financial consultant with Exemplar Financial Network. “You’re bringing together two people from two totally different backgrounds, and it’s important to talk about it. It’s also important for people entering their second or third marriages.”

Besides helping people plan for their retirements and advising them on their finances, Issel is Matt Mariani’s stepfather. Issel’s wife, Ann Mariani-Issel, is a vice president with Dorion-Gray Retirement Planning in Crystal Lake.

With both of his parents in the finance sector, Matt Mariani got plenty of advice on money management, although Mariani said most of it he learned through example.

They talked to him about preparing for retirement, saving, budgeting, and being conservative with income, Issel said. The next conversation is life insurance.

While much of the Marianis’ financial planning is unspoken, more couples are coming clean about their finances before tying the knot, according to an Experian Consumer Services survey that compared couples married before and after 2008 and the recession.

“People are getting the issue that money is the No. 1 issue,” said Dan Blair, a counselor and owner of Blair Counseling and Mediation in Crystal Lake. “They frequently come to get help on that issue, and they don’t just come to counselors. They go to banks and look online.”

Finances have grown as an issue for Blair’s clients since 2008, he said, adding he typically sees three issues in this area: differing views on wants and needs, how to handle unexpected expenses, and a seeming inability to save money.

The heightened awareness around family finances caused by the recession may not be the only reason more recently married couples are talking about money before they get married.

For some of Marianis’ friends, student loans are causing them to push back some milestones, including getting married, or buying a home, they said.

While student loans weren’t as much of an issue for them, Matt and Crystle Mariani – Matt works for Centegra Hospital – Woodstock’s concussion and cardiac clinic and Crystle is a special education teacher at Cary Junior High – decided to rent until they felt comfortable and stable enough to take the next step and buy a home.
Now their focus is putting aside enough money to cover property taxes and household expenses because as first-time homeowners they don’t really know what to expect, Matt Mariani said.

As farmers, the Hebron couple’s livelihood is at the mercy of the weather and the market.

From 2001 to 2006, times were especially tough because corn and soybean prices were down, but the costs for necessities such as fertilizer were up.

But the Von Bergens are fortunate because they have been able to rely on each other for support for the past 42 years.

For many couples, financial struggles can be so stressful that they lead to divorce. With the current economic downturn, more couples with marriage problems stemming from financial difficulties are seeing local marital counselors.

Perhaps the counseling is working, because divorces are down statewide and appear to be holding steady locally even while the population has increased.

The number of divorces in Illinois per 1,000 people has decreased to about 2.6 in 2005 from 3.3 in 1999, according to the most current data available from the National Center for Health Statistics.

In McHenry County, the number of marriages dissolved in court has stayed fairly stable at about 1,200 a year for the past decade, according to court statistics.

But marriage and family therapist Dan Blair of Blair Counseling in Crystal Lake said he had seen an increase in the number of clients with marriage problems revolving around finances since the Sept. 11, 2001, terrorist attacks.

“I have found that money is often the straw that breaks the camel’s back,” Blair said. “Even more so now, I’m finding that it puts a wedge between husband and wife.”

Often, the primary wage earner feels the financial burden and overworks, Blair said. The other spouse is left to take care of the home or get a job to help make ends meet. Each spouse becomes distant and resentful of the other, and sometimes spending money becomes an escape, compounding the problem.

The Von Bergens have survived their marriage by supporting each other; diversifying their business to include a country market, school tours, and events like the Fall Fun Fest; and staying optimistic that the economy can get better as quickly as it turned bad, Bobette Von Bergen said.

“You’re in [the marriage] for the long run,” she said. “It causes strain and you get cranky, but in farming every day can be a turnaround.

“You have to talk and support each other. There were some really down times, but most of the time you can’t do a whole lot about it.”

Recognizing that the economy affects everyone is key, said Michele Weiner-Davis, founder of divorcebusting.com and director of the Divorce Busting Centers in Woodstock and Boulder, Colo.

“Not enough couples recognize that they’re victim to the poor economy like everybody else,” Weiner-Davis said in a phone interview from Boulder.

She offered three pieces of advice to couples struggling with marriage and their finances.

First, recognize that everyone else is stressed out for the same reasons, and your financial problems are not necessarily related to something your spouse has done.

Secondly, if you and your spouse have different ideas about how to handle the finances, try to understand your partner’s point of view.

And finally, if you can’t solve the problems alone, get help from a counselor.

“I am a very firm believer that marriage can really tolerate many things going wrong as long as couples have a platform to be able to discuss it, negotiate about it, collaborate and be empathetic,” Weiner-Davis said.

“As long as people can do that, their marriage will survive. When there’s no way to communicate so all they’re doing is fighting and blaming each other, that’s what really puts marriage at risk of divorce.”

Blair said he had recommended that spouses schedule time to be together, set spending limits in different categories, and divide home chores to help foster a sense of partnership in the home.

Gunnar Gitlin, a divorce attorney in Woodstock, said financial problems usually were a symptom of other problems in the marriage, and he didn’t see an increase in divorces as a result of the poor economy.

What was increasing, he said, was the number of couples choosing not to hire lawyers in divorce proceedings to save money or trying to solve all issues in just one court appearance.

But to avoid getting to the point of worrying about the cost of a divorce, licensed clinical psychologist Susan Olesch, who practices in Lake in the Hills and Algonquin, suggested that couples see a financial adviser who can help them get a handle on their money situation and set a budget.

“The majority of people I see stay together,” Olesch said. “In a real marriage, nothing breaks it up if you work on it and can get past it. If you want to make it work and you really value the other person, you can make it work.”