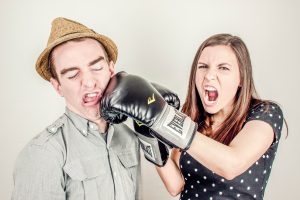 To resolve issues with an “ex” in an unavoidable divorce, present and future co-parents may have to be at the point where they are tired of having issues and spending money for going to court.  To resolve issues co-parents have to let go of total control, which can be scary.  One also has to set aside the anger, hurt, and betrayal that fuels ongoing conflict.  The emotion is understandable, but may not resolve the conflict.

Given the emotional intensity of interacting with one’s “ex,” here’s a way to remember keys to success, if success is within your control.  Remember the goal is not to determine who is “right,” which is debatable, but to stop the issue from going back and forth indefinitely.  There are circumstances where this is necessary, and expensive.  On the other hand, even court orders do not stop the cycle.

Feeling.
Focus on the other’s feeling about the topic, one topic at a time.  Dealing on the feeling level may not be as satisfying as proving the “facts,” but surprisingly, “facts” can also be debatable.  Allowing the feeling of the other takes away the frustration of having to prove a point and creating more defensiveness.  Feelings are the basis of one’s position and often stay they same whether or not one is right or wrong.

Future.
The future is negotiable; the past is not.  The past may be important to understand, but that will not change the past.

Flexibility
The chance of resolving an issue is dependent on flexibility.  This is not to say that one should be flexible, but that to resolve an issue some area of flexibility must be discovered.

Fouls.
How do you derail progress?  Three examples include name-calling, criticism, and topic-jumping that creates defensiveness that add “fuel to the fire.”

These approaches to problem-solving are inadequate if one side believes that non-agreement or “winning” is a more desired scenario.  But even in “winning” there is much to be lost.

Are Emotions Commanded?
Emotions Versus Actions